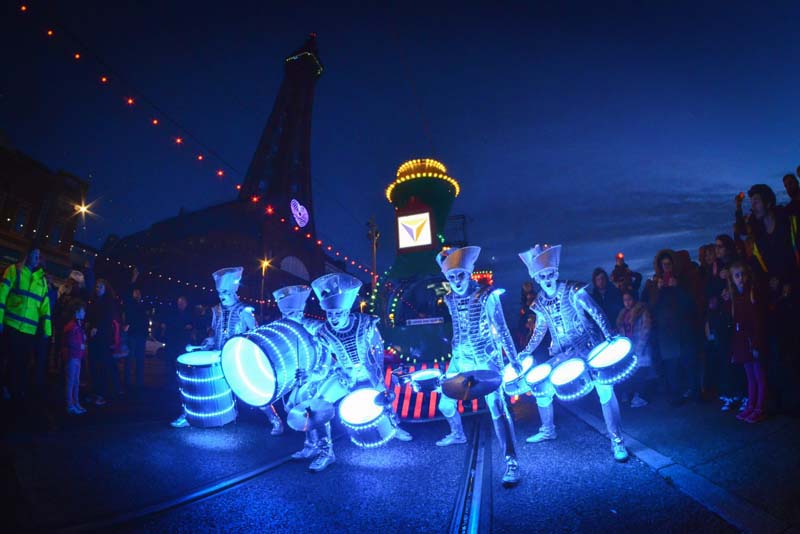 The Lightpool festival began in 2016, to celebrate the Illuminations by bringing contemporary light and fire artists to Blackpool to be inspired by the town’s unique relationship with light. The festival won the Large Tourism Event at the Lancashire Tourism awards in 2017.

Lightpool Festival 2022 is a festival of light, projection and performance that will take place between October 14 and 29 in Blackpool as the climax to the world-famous Blackpool Illuminations.

The world-famous Illuminations need little introduction. There are six miles of traditional festoons and tableaux along Blackpool Promenade – no wonder it’s commonly known as the greatest free light show on Earth!

The Blackpool Tower Projections transform The Blackpool Tower into a sea of light, colour and sound, as a stunning, digitally mapped multi-media show is projected onto this iconic building. There are five individual projection shows, including the three headline shows.

Flux is composed of 48 dynamic light lines, 1.5 m long, spaced 40 cm apart, motorised and controlled in real time. The formal multiplication of these lines coupled with micro variations of phases, temporal delays, speeds and amplitudes allows us to sculpt a 20m long object, alive and evolving with a cyclic back and forth movement.

An 8m by 3m creative lighting installation composed of 48 unfilled water containers, which typically hold 1,000 litres of water each, specially adapted to create a stunning, transportable and eco-friendly light feature to raise the importance of water.

To celebrate Blackpool’s unique tramway history, this Parade is a tribute to the rich heritage of our Illuminated Trams. Back by popular demand, are Spark! the original and best LED drummers.

As a man leaves his house for the final time, a flood of memories unfolds. Personal moments collide with world events as the old building shows its history and bares its soul. imitating the dog mix beautiful animation with live performance in this musical installation about memory and time.

An exhilarating menagerie of illuminated Carnival will hit the Tower Ballroom for an electrifying static showcase of music, puppetry and dance. Internationally recognised Carnival performers will present a showstopper over 30 minutes, bringing a diverse melting pot of Carnival magic.

Vines, flowers, fruit, fungus and creatures take over St.Johns Church as it is reclaimed by nature as a large scale, playful, rhythmic projection.

Blackpool Light of my Life